Looking beyond the seemingly discriminatory tone of Banksy's Clacton pigeon mural, children consider what message Banksy was trying to convey, and alter the image to reflect British Values.

Pupils should be taught to:

The DfE advises that the promotion of British Values should be through SMSC (Spiritual, Moral, Social and Cultural development). Ofsted will also assess these through the wider curriculum.

According to Ofsted, ‘fundamental British Values’ are:

Pupils should be taught:

Please check that this lesson theme and the artist Banksy’s images are appropriate for the children in your class. Scroll to the bottom of the page to see example work from pupils at John Scurr Primary School who are using their art to make new pupils feel welcome in their school.

Watch the video on Link: 'Banksy: Artist or vandal?' on VideoLink from podcastsinenglish which explains the enigma of the famous street artist. Please be aware that some of Banky’s art featured in this clip shows mild nudity and gestures that some viewers may find offensive. Please ensure you have watched the video before showing it to your class.

Scroll down the CBBC Newsround page here: 'CBBC Newsround - Banksy mural in Dover' to the Banksy mural of the EU flag being chipped away. Explain that this mural was anonymously painted over in 2019 so that it could no longer be seen. Ask the children why someone might have wanted to paint over the mural?

Ask the children what they now know about the famous artist having watched the two video clips. They may now be aware that Banksy:

Show on your interactive whiteboard

Tell the children the brief story behind Banksy’s pigeon mural.

Banksy painted the pigeon mural on a boathouse wall in Clacton-on-Sea in Essex. The picture shows a group of pigeons holding anti-immigration placards saying, ‘Go back to Africa’, ‘Migrants not welcome’ and ‘Keep off our worms’, while an African swallow looks on.

The mural, which was thought to be worth around £400,000, was destroyed by officials from Tendring District Council, who considered it to be ‘inappropriate, offensive and racist’.

Ask the children questions such as:

Encourage the children to consider the ‘racist’ label that the mural has been given by asking:

Put the children into pairs or larger groups. Give each pair or group a copy of the Activity: Clacton pigeon mural by Banksy. Bearing in mind the absence of ‘British Values’ in the mural, ask each group to look at the piece and discuss how they could change this. The children need to alter the image to a scene that is more welcoming to migrants.  They could do this by:

The children should use their sketchbooks to work out some ideas and then, working in their groups, agree on changes, and make them on the A3 sheet.

Pupils needing extra support: Should be placed within a mixed ability group so there will be support for all learners. May need to use one of the class suggestions for how to alter the pigeon image.

Pupils working at greater depth: Should analyse and evaluate the messaging behind the artwork in greater depth. Should be able to come up with their own original ideas about how the message could be altered.

Ask each group to stand up and share their revised Banksy painting, showing the welcoming side of immigration. They should explain why they made their alterations to the image. Photograph the A3 sheets so that everyone can have a copy for their sketchbook (or reduce to A4 by photocopying).

Pupils with secure understanding indicated by: Understanding why Bansky makes public art with a message and that a message can be changed by subtle revisions.

Pupils working at greater depth indicated by: Will connect to the SMSC aspects of this lesson with both empathy and understanding and see the British values in the lesson. 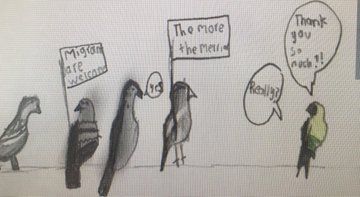 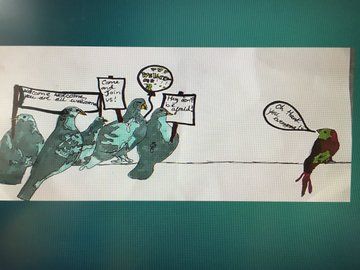 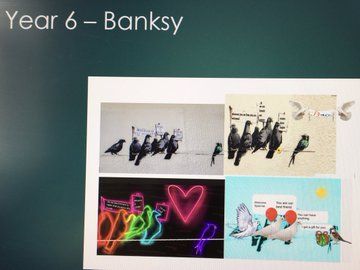 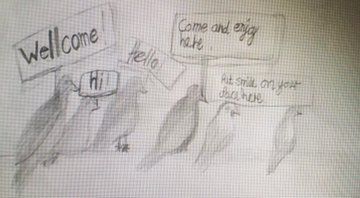 Created by:
Susan Coles,
Art and Design specialist
Susan is an educator, artist and an active advocate and well-known champion of art craft and design education. Her roles include: Secretary to the All-Party Parliamentary Group on Art, Craft, Design Education, Past President, and now Honorary Fellow of the…
Find out more
Assessment Art and design Y5: Every picture tells a story Previous Lesson
Lesson 2: Inspired by Rorschach Next Lesson